The Black & Brown Foundations of Mathematics That We Know Today! 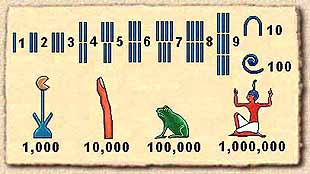 To put it bluntly: Mathematics was not invented by White Men.

They came to understanding Mathematics late in the game by way of brilliant Africans and Asians. But, because of the European dominance of economic power from the 1600s onward, their capitalists and religious leaders rewrote ALL history to justify their political and economic global rule over the 17th, 18th, 19th, 20th and (they think) 21st Centuries. And Mathematics being such an essential tool and philosophical structure, they created a myth around its knowledge and accessibility to its knowledge. It could only be accessed and understood by white men of property. it was incomprehensible to all European women and all non Europeans of any class and gender.

Hence, they rewrote history to falsely assert that all mathematical thinking- deep or otherwise- originated in Greece. Indian economist and activist, George Joseph, back in the 1980s exposed this myth... and joined the global battle against the deep Eurocentricism in mathematics. He has written one of the most important books on Eurocentric Mathematics called: The Crest of the Peacock- The Non European Roots of Mathematics.

What follows below are various pieces of this critique of Eurocentric Math compiled over the past 4 decades.

For a start, here are some charts developed by Brother George Joseph in order to help map out the myth and reality of Mathematics evolution.

Foundations of Eurocentrism in Mathematics

Joseph suggests that "there exists a widespread Eurocentric bias in the production, dissemination and evaluation of scientific knowledge." He diagrams the "classical" Eurocentric approach as follows:

Joseph claims that this Eurocentric approach served as a "comforting rationale for an imperialist/racist ideology of dominance" and has remained strong despite evidence that there was significant mathematical development in Mesopotamia, Egypt, China, pre-Columbian America, India and Arabia, and that Greek mathematics owed a significant debt to the mathematics of most of those cultures. A somewhat grudging acceptance of the debts owed to Greek mathematics and to Arabic contributions led some mathematical historians to accept "the 'modified' Eurocentric trajectory":

The modified trajectory still does not take into account the contributions of India and China, nor does it indicate the route through which Hellenistic, Chinese, Indian and Arabic mathematical translations, refinements, syntheses and augmentations arrived in Western Europe. Joseph therefore suggests the following "alternative trajectory" (from 8th to 15th century):

Among the interesting history presented by Joseph is that the earliest known general proof of the Theorem of Pythagorus is contained the Sulbasutras (circa 600-800 B.C.) from India, that "there is no evidence that Pythagorus had either stated or proved the theorem," that Arabic geometers laid the foundations for Saccheri's work in non-Euclidean geometry, that Spain and Sicily were the main points of contact for dissemination of mathematical knowledge to Western Europe, and that "practically all topics taught in school mathematics today are directly derived from the work of mathematicians originating outside Western Europe before the twelfth century A.D."

Joseph refutes the suggestion that pre-Greek mathematics lacked the concept of proof and insists that criticism of Egyptian and Babylonian mathematics as "more a practical tool than an intellectual pursuit" is symptomatic of Western intellectual elitism and racism. Joseph urges the "countering of Eurocentrism in the classroom." His concluding paragraph appears to be a strong statement of support for Ethnomathematics in the classroom and is reproduced below in its entirety:

Finally, if we accept the principle that teaching should be tailored to children's experience of the social and physical environment in which they live, mathematics should also draw on these experiences, which would include in contemporary Britain the presence of different ethnic minorities with their own mathematical heritage. Drawing on the mathematical traditions of these groups, indicating that these cultures are recognized and valued, would also help to counter the entrenched historical devaluation of them. Again, by promoting such an approach, mathematics is brought into contact with a wide range of disciplines,including art and design, history and social studies, which it conventionally ignores. Such a holistic approach would serve to augment, rather than fragment, a child's understanding and imagination.

EXAMPLE A: FROM Ancient Egypt:

volume of a truncated, square based pyramid of height h, with base a and upper square side b.